How to Play PowerPoint on HTC One

Convert PowerPoint presentation to MP4 video for viewing on HTC One

HTC One, also known as HTC M7, is the latest flagship mobile from HTC released on February 19th, 2013. Viewed as a revolutionary product that sets an example for innovative smartphones, HTC One wins all kinds of complimentary words and applauses in mobile field. However, bearing loftily expectations to narrow the gaps between HTC mobiles and Samsung Galaxy phones, HTC One is now standing in a crossroad. Moving towards the right direction, HTC One is promising to be one of the best mobiles of the year. Otherwise, it may meet the same fate of HTC One X who gradually fell from a market surprise to a mediocre device. Generally speaking, after combing top-notch components and innovative technologies into an integrated part, HTC One astounds the world with outstanding features. Here some of those features are listed below. 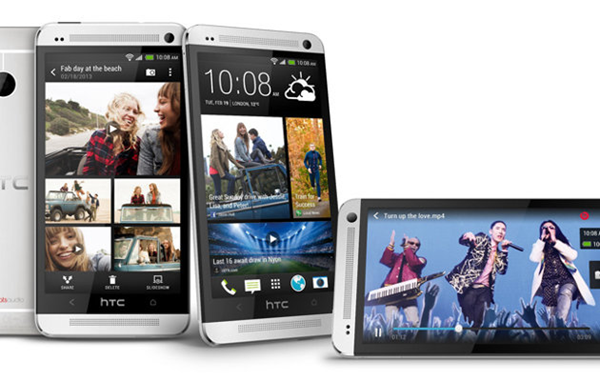 Advanced Processor: The 1.7GHz quad-core Snapdragon 600 processor in HTC One is the latest CPU chip released in January 2013. It is 40% more powerful than the Snapdragon S4 Pro and turns out to be one of the best processors a mobile can get so far.


Monster Display: It is not a surprising thing that HTC One can sport a 4.7-inch display running at 1080p. What really amazes people is the pixel density of HTC One. After adopting SoLux technology in its display, HTC One can get excellent picture quality and 468 pixels per inch.


Ultrapixel: The camera that employs Ultrapixel technologies is the most innovative feature of HTC One X. When shooting photos, the mobile will take full advantages of the three pixel layers in the camera to produce high-pixel and good-quality photos. Therefore, even though the mobile only gains a 4-megapxiel rear camera, it even works better than the 8-megapxiel camera of iPhone 5.

Boom Sound: HTC One's Boom Sound is provided by the front-facing dual speakers that are both attached with Beast Audio technologies. It is said the Boom Sound has made HTC One a smartphone with the loudest sound.

HTC Blink Feed:  To make sure the mobile can run as smoothly as possible, HTC One runs Android 4.1.2 and the latest HTC Sense 5 UI. As an important feature of Sense 5, HTC Blink Feed allows users to access to social feeds and over 1,400 news feeds all in one place. 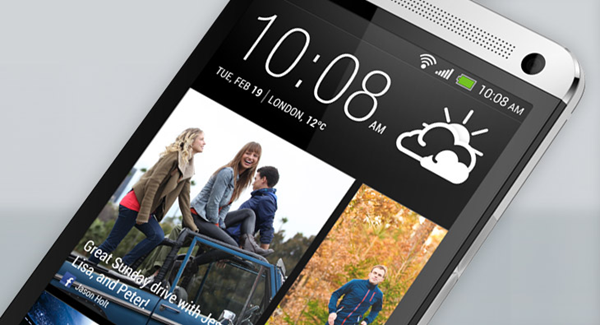 How to Play PowerPoint on HTC One?

Step 1: Download and launch Moyea PPT to Video Converter, a tool designed as a PPT to HTC One converter. Open it and then click "Add" button to import the PowerPoint for conversion. 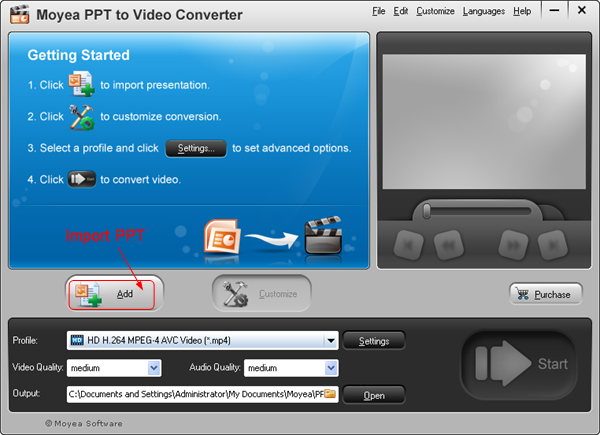 Step 2: Choose the output folder as MP4 video in the drop-down menu of "Profile". To make sure users can view the converted PPT on HTC One, click "Settings" button and then set the video size of the MP4 movie as "1920x1080" and audio codec as "AAC". After that, click "Start" button to begin the conversion process from PowerPoint to HTC One movie. 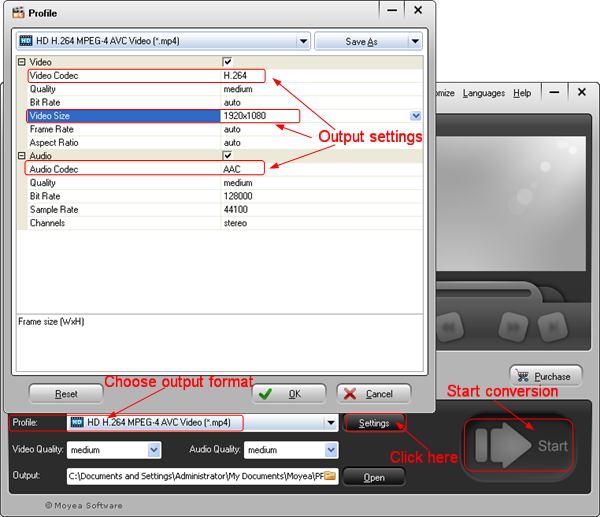 Want a PowerPoint to HTC One Video Converter?