How to View PowerPoint on Blackberry Playbook


2011 may not be "the year of iPad 2" as Steve Jobs said himself, but it will surely be the year of tablet. Following Apple's iPad series, Samsung's Galaxy Tab series and Motorola's Xoom, RIM has released its own Blackberry tablet Playbook. Since RIM's assembly partners were also committed to supplying touch screen panels to Apple for its iPad 2, they didn't have enough supplies to meet its demand, due to the affect of the Japan earthquake on March 11. It was announced to release much earlier than iPad 2, however, it will finally be on sale on April 19.
Blackberry Playbook features 1Ghz Dual Core processor, 1GB RAM, 1080p HD video playback and HDMI output. These parameters mean that Blackberry Playbook will be an excellent multimedia entertainment device. With an amazing 7-inch 1024x600 screen and Crystal clear HD display, Playbook can be a wonderful mobile video-conferencing machine.
However, the PowerPoint cannot be played directly on the Playbook. I recommend this PPT to Blackberry Playbook Converter to help you to view PPT on Blackberry Playbook after converting PPT to Blackberry Playbook friendly video format such as H.264, MPEG4, WMV. In addition, it will preserve all the PowerPoint original elements like fonts, languages, animations, transitions, video clips and sounds after the conversion task.
First, Free Download Moyea PPT to Video Converter, install and run it. And then follow the steps below: 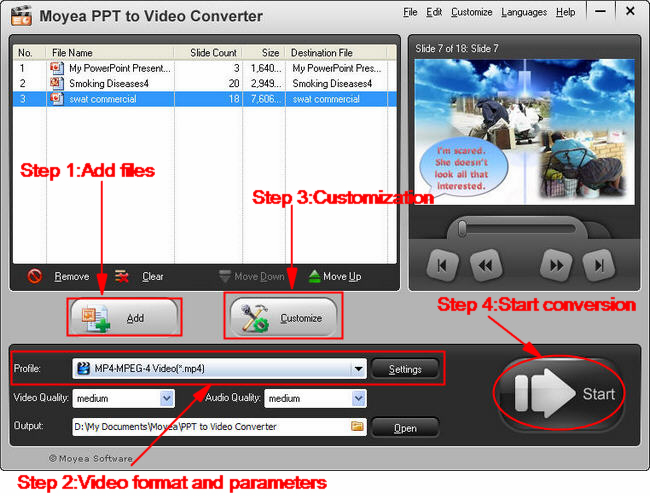 Step 1:
Click "Add" on the main panel to import source files.
Step 2:
You can select Playbook-friendly format (H.264, MPEG, DivX, WMV) from the categorized output formats list in "Profile" drop-down list and specify the output path to save your converted files.
For more suitable parameters for Playbook, you can click the "Settings" button next to the format field to open the Settings window and set video resolution, frame rate, bit rate, video codec, etc.
Step 3:
In the main panel, click the "Customize" button to customize the output video. There are five tabs - Timing, Music, Audio, Slide and Conversion for customization.
Step 4:
The last step will be conversion. Click "Start" button, and all the tasks will be done.
After a few minutes, you will get the converted video files which are compatible with Blackberry Playbook. 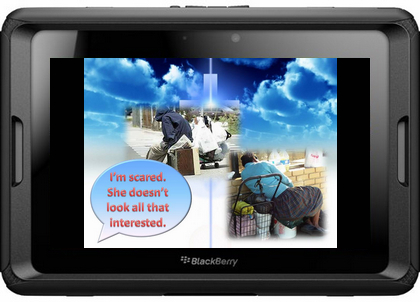