How to view PowerPoint on Xbox 360

convert PowerPoint presentation to video for watching on Xbox 360

Xbox 360 is the second video game console produced by Microsoft, and was developed in cooperation with IBM, ATI, and SiS. The integrated Xbox Live service allows players to compete online and download content such as arcade games, game demos, trailers, TV shows, and movies. The Xbox 360 is the successor to the Xbox, and competes with Sony's PlayStation 3 and Nintendo's Wii as part of the seventh generation of video game consoles.

How to convert PowerPoint to Xbox 360 video

To post your PowerPoint on Xbox 360 is as easy as you can imagine – if you take this smart tool Moyea PPT to Xbox 360 Converter.
Just in several clicks!
Step 1 Run the program and add PPT files
Run Moyea PPT to Xbox 360 Converter after you have it installed on your computer. To import a PowerPoint file, click Add on the main panel of the program.
Step 2 Set the style to Xbox 360 Video and specify an output path
In the list of Style, select the preset output format Xbox 360 Video with the extension *.wmv. Note the profile field may change with the style you set. In the Output field, specify a proper location on your hard drive for the output video. 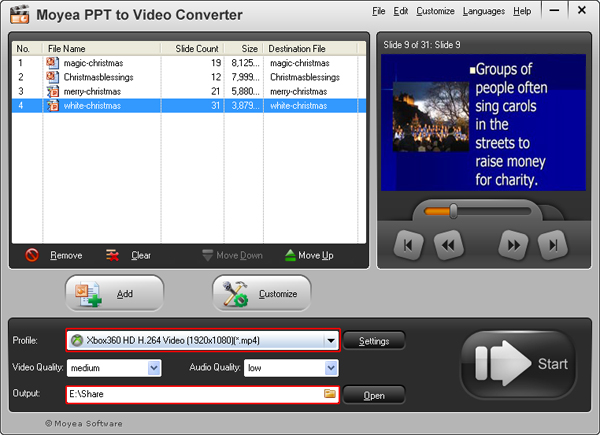 Step 3 Make advanced settings for profile parameters
Click Settings next to the Profile field to manually set the profile parameters. This includes two parts respectively as audio and video items. Select the appropriate value from the preset parameters as you need or follow the default settings. Once set, click OK to save your current settings. 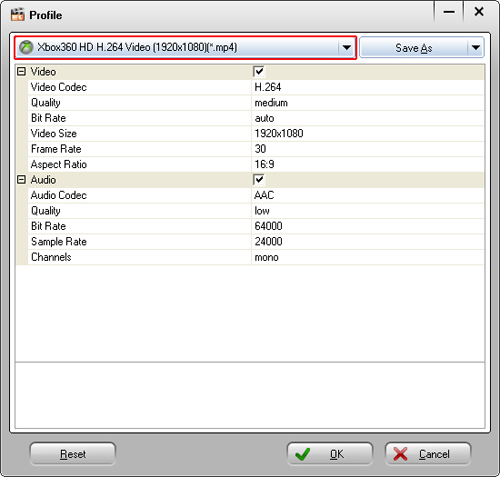 Step 4 Customize the output effects
In the main panel, click the Customize button to customize the output video. There are five panes - Timing, Music, Audio, Slide and Conversion for custom. Set each pane as necessary.
Step 5 Convert your PPT files
After you have set up all the conversion parameters, hit the Start icon to start converting. The conversion process is displayed clear in the task list. Click the output file link to view the converted video in the preset folder. Transfer the video to your Xbox 360 and watch the HD slideshow as you wish. View PowerPoint on HD TV through Xbox 360, like the sample below: 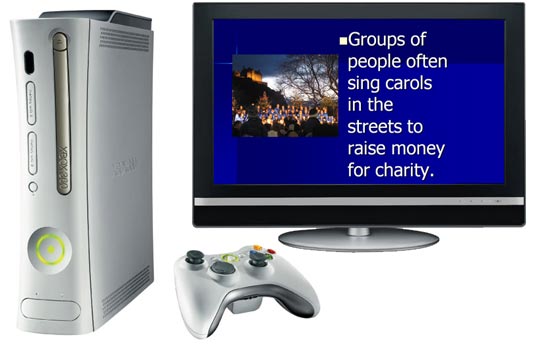