How to View PowerPoint on iPad Air

Convert PowerPoint to MP4 Video for Viewing on iPad Air


Apple's fall 2013 event reveals the fifth-generation iPad – iPad Air, a thinner, lighter and refined iPad with improved design and performance. If you value more expansive screen and rely on the virtual keyboard, you may like the lightest full-size iPad Air. The new iPad Air lets you do more than ever, in more places than ever.

The new iPad Air is video-friendly, there are two main aspects to prove it. Firstly, the iPad Air runs a new A7 chip with 64-bit architecture, making it faster to download and play videos and movies smoothly on it. Plusing the 9.7-inch Retina Display, 2048 x 1536 resolution at 264 pixels per inch, and the lighter heft at just 1 pound, all makes it perfect to hold on hand to watch movies or videos on the go. 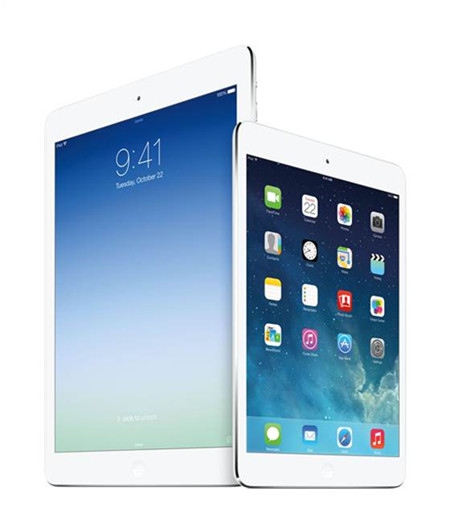 More inspiring news: On this event, Apple updated its iWork and iLife suites of software apps, and began offering them for free on its devices. Now the free apps available include iPhoto, iMovie, GarageBand, Pages, Numbers, and Keynote. But one thing you should pay attention to is that these free apps are only available on the iOS and Mac devices that are activated or bought after Sep. 1th, 2013. You can get the free apps on the latest iPad Air, iPad mini 2, iPhone 5s and iPhone 5c. If you want to view PowerPoint on your old iPad, iPhone or iPod touch, you have to buy Keynote to open PowerPoint on iPad Air or use other third-party PowerPoint to video converter to convert PowerPoint to iPad Air video for playing it on iPad Air.

On the other hand, you may come across some problems when using Keynote to view Microsoft PowerPoint files on iPad Air. For example, the original music, video, and animations you have added into your PowerPoint files can’t be displayed completely in Keynote. To help you view PowerPoint on iPad Air smoothly with no any effect loss, you need to transfer PowerPoint to iPad Air supported videos with use of a good PPT to Video Converter. Moyea PPT to Video Converter is the best PowerPoint to iPad Air converter, which can help you convert PPT to MP4 or MOV video so as to play it on iPad Air. More importantly, the professional but inexpensive PPT to iPad Air converter can create videos from PowerPoint with all the original PowerPoint elements retained.

Learn the guide below to convert PowerPoint to iPad Air video. The PPT to iPad Air converter is easy to operate, download the free trial version to start now.

Firstly, you should add PowerPoint files from your computer by clicking "Add" button. Multiple PPT files are allowed to be imported and converted at a time. 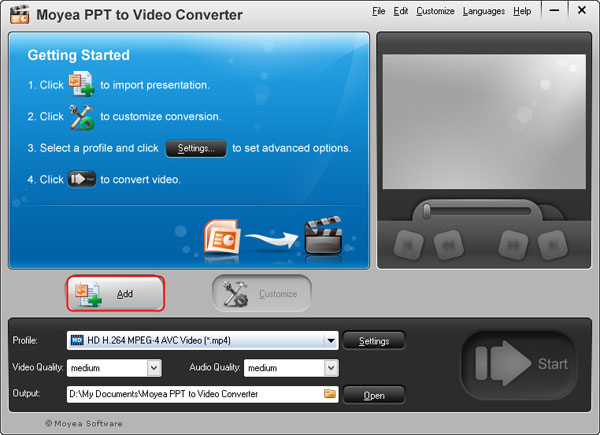 Secondly, you should select an output video profile from the preset profile list provided. Just click “Profile” and choose "iPad">"iPad HD Video (*.mp4)" in the drop-down menu. You can also choose .mov as the output video format. 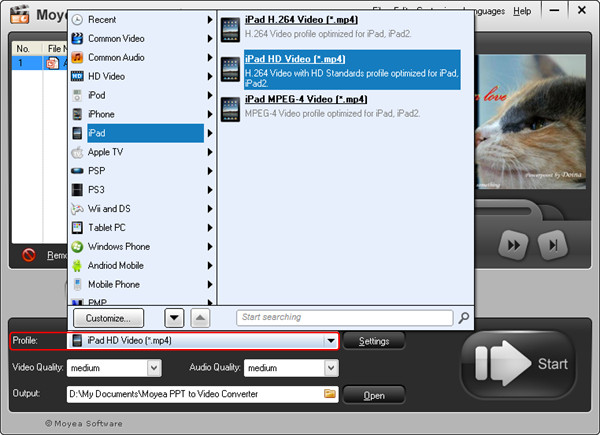 Next, you should modify the output parameters to optimize the output video for playing on iPad Air. Just click "Settings" button lying next to Profile bar to enter the Profile setting panel. Then set the video size as "1920x1080" and video codec as "H.264". 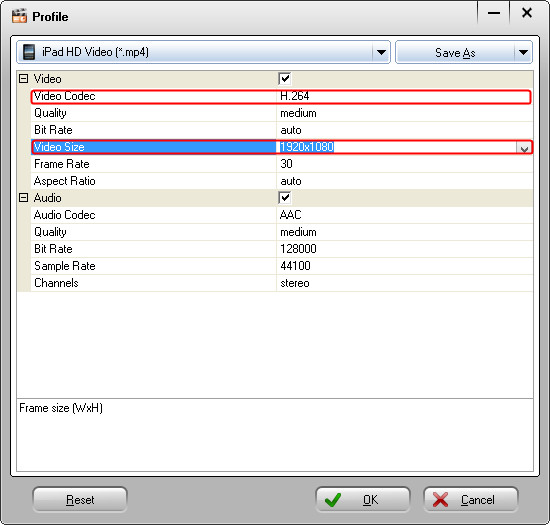 Then you have completed all the output video settings, click "Start" button to start to convert PowerPoint to iPad Air video. You are able to preview the video conversion process in real time by clicking the "Preview" box.