WMV, short for Windows Media Video, is a compressed video file format for several proprietary codecs developed by Microsoft. It was originally designed for Internet streaming applications as a competitor to RealVideo. Through standardization from the Society of Motion Picture and Television Engineers (SMPTE), WMV has gained adoption for physical-delivery formats such as HD DVD and Blu-ray Disc.

How to convert PowerPoint to WMV

With then professional PowerPoint to WMV converter: Moyea PPT to Video Converter, you can create a lively WMV file from your PowerPoint without difficulty.
Here come the exact steps:

Step 1 Launch the program and add PPT files
After you have Moyea PPT to Video Converter installed on your computer, launch it and click Add to import PowerPoint files. 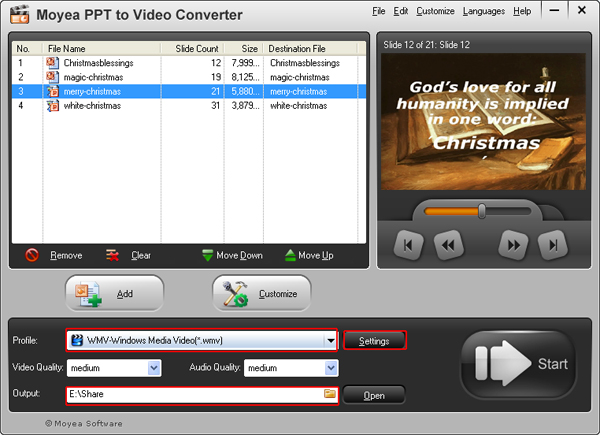 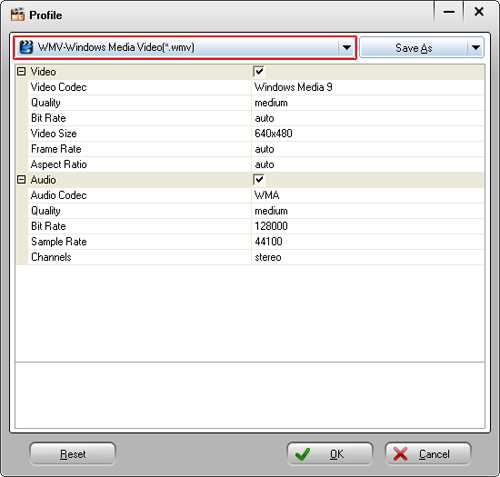 Step 4 Customize the output effects
Click the Customize button to define the output AVI file yourself. This contains Timing, Music, Audio, Slide and Conversion. Set each item as you need, or follow the default settings.

Step 5 Start to convert PowerPoint to WMV
Click the Start icon to start converting the PowerPoint presentation to WMV file. This may take some time. So leave it to Moyea PPT to Video Converter and get yourself a cup of coffee.

When the conversion is done, click Finish to view the AVI files in the specified folder. You can play the WMV files with Windows Media Player to test the effect, shown as follows:

You can also upload the converted PowerPoint WMV video to Microsoft Zune or Windows-mobile based phone for mobile presentation.