How to View PowerPoint on Google Nexus One


The Google Nexus One has been one of the most popular smart phones in the past year. But I really don’t understand why Google should enter into this Smartphone market. Though Google branded, the Nexus One is actually manufactured by HTC, the second famous Smartphone manufacture just behind Apple. So it is also called HTC Nexus One. As a network and software company, Google has neither the factories nor techniques of making Smartphone. Besides, it isn’t able to design the cover of the Google Nexus One itself. We can see clearly it is designed by HTC.
Anyway, most customers don’t care about such stuffs as long as the phone is good and worthwhile. Google Nexus One does have advantages in this part. When first released on January 5, 2010, it was running the Android 2.1. Later it has upgraded to Android 2.3.3 (gingerbread) since February 23, 2011. This is one of the advantages of open source OS Android; you can upgrade the OS for free.
Equipped with Qualcomm Snapdragon 1GHz processor, which is the same level of Apple A4, Google Nexus One is really fast. And with the 3.7-inch 480x800 pixels AMOLED display, it gives uses superb video experience when watching movies or playing games.
Nowadays, the newly released Smart phones usually have a 4-inch display, like Samsung Galaxy S, HTC Thunderbolt, Motorola Droid X, which have quite good performance when playing PowerPoint, but the little less visual range won’t bother much.
I haven’t even seen one Smartphone that can totally play Microsoft PowerPoint. Of course we can use Android Apps like ThinkFree Office, online services like Google Docs and PPT sharing websites like authorSTREAM.com or DocStoc.com. However, to preserve all the PowerPoint original elements like transitions, animations, video clips, audio, fonts and languages, a PPT to Google Nexus One video converter is absolutely the right choice.
With simply 3 steps, the PowerPoint can be converted to a Goodge Nexus One video using Moyea PPT to Video Converter and you can then freely enjoy the fun with it. 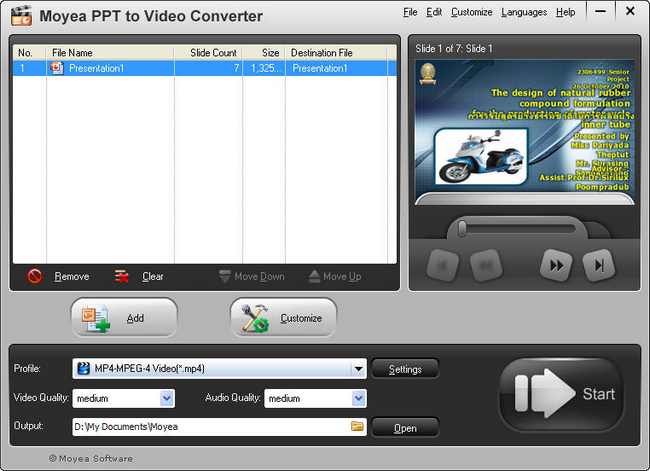