How to Play PowerPoint on Toshiba BDX1100


If your budget is under $100 and you want to enjoy the HD Blu-ray experiences with excellent pictures and sounds, then Toshiba BDX1100 would be your best choice. The Toshiba BDX1100 is the entry-level Blu-ray player of Toshiba’s current range and comes with modest and practical specs. It could handle anything you want a basic Blu-ray player to do. It plays the most popular video formats such as BD-ROM, DVD, BD-R, BD-RE, DVD-R, DVD-RW, CD-R, CD, CD-RW, AVCHD and CD-DA. As a Blu-ray player, Toshiba BDX1100 could not only output 1080p/24fps Blu-ray movies but also automatically up convert non-1080p formats to 1080p with good clarity when playing standard DVD/CDs.

How to play PowerPoint on Toshiba BDX1100 with transtions, animations, audio and video clips

First, download and install PPT to Toshiba BDX1100 burner.
Moyea PPT to DVD Burner is a professional and easy-to-use tool to help you burn PowerPoint to Blu-ray/DVD Discs playable with Blu-ray Disc player or DVD player on TV as well as convert PowerPoint to popular video formats while preserving all the original PowerPoint elements.

Second, after importing the PowerPoint files to the program, choose “Create Blu-ray Disc” in the “Options” tab.

Third, choose a default Blu-ray menu or create your own.
Besides the ordinary menu-editing functions, it is the first PPT to DVD/Blu-ray burner which enables using video as menu background. 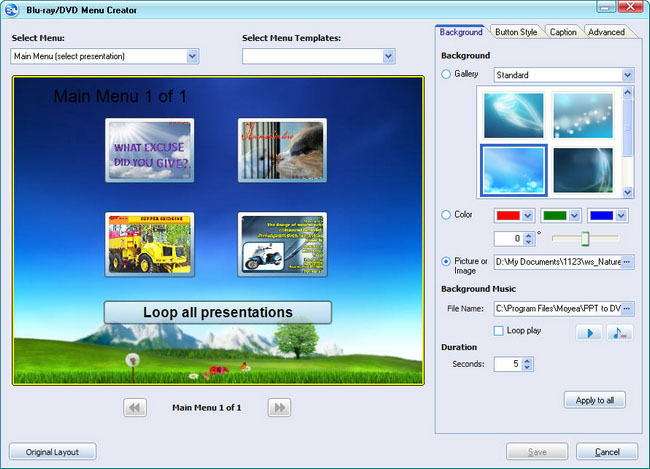 Then, personalize the Blu-ray output with logo/watermark.
If you want to protect your copyright, you can add logo or watermark in the PPT to Blu-ray burner.