How to Play PowerPoint with Sony BDP-S570

The Sony BDP-S570 is currently one of the only Blu-ray players at this price – under $200 with 3D compatibility, while other manufacturers are charging around $400 for their 3D Blu-ray players. Many features of Sony BDP-S570 include:
1. Watch Blu-ray Disc movies in Full HD 1080p.
2. Play DVDs in near HD quality, which means it will up convert the DVD quality automatically.
3. Quick start/load lets users begin enjoying HD experiences faster than ever.
4. 1GB of onboard storage allows the BDP-S570 owners to access BD-Live features without a separate USB memory drive.
5. Turn your iPhone or iPod touch into a remote control by downloading a free app.

Step 1: Free download and install PPT to Sony BDP-S570 Burner.
Moyea PPT to DVD Burner is a professional and easy-to-use tool to help you burn PowerPoint to Blu-ray/DVD Discs playable with Blu-ray Disc player or DVD player on TV as well as convert PowerPoint to popular video formats while preserving all the original PowerPoint elements.

Step 2: Import PowerPoint presentation files to the program.
Up to 12 PowerPoint files can be burned to Blu-ray Disc at one time.

Step 3: Choose Blu-ray out options for your PowerPoint files.
From the Options interface choose “Create Blu-ray Disc“. In “Norm” to choose your TV standard, if you are not sure, please click “Help” to select according to countries. 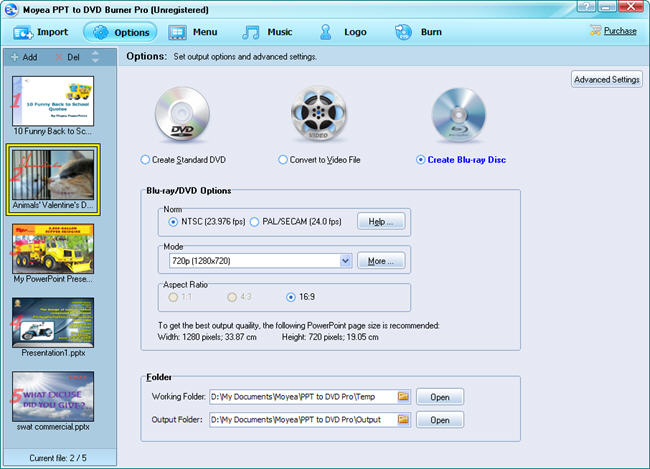 Step 4: Choose a default or create your own Blu-ray menu.
In the latest version of Moyea PPT to DVD Burner V4.2, video can also be used as Blu-ray/DVD menu background besides the still image background.

Step 5: Personalize the Blu-ray output with logo/watermark.
To protect your copyright, you can add logo or watermark in the PPT to Sony BDP-S570 Blu-ray burner.