How to View PowerPoint on HTC EVO 3D


Although we could install Android apps like Quick Office, Documents to Go or ThinkFree Office for viewing PowerPoint on HTC EVO 3D, it won’t perform good enough as we expected. Actually, there is a better and easier way to watch PPT on HTC EVO 3D – converting PowerPoint to video like MP4. Before that, let’s take a look at this machine:

The HTC EVO 3D is the true successor of HTC EVO 4G, which is a device that came out on June 4, 2010 and remains as one of Sprint’s most popular phones. It is HTC’s first 3D Smartphone which has adopted Android 2.3 Gingerbread operating system and HTC Sense UI 3.0. The fuselage of this machine is 126*65*12.1mm and the totally weight is 170g. In addition, it has equipped with a 4.3-inch multipoint touch screen with a resolution in 540x960 and dual 5MP rear cameras for 3D capturing and recording at 720p. What’s more, it features a MicroSD/TF card slot, USB interface, Qualcomm 1.2 GHz dual-core processor, 1GB RAM, GPS, WIFI and Bluetooth. Besides, the HTC EVO 3D is juiced with Sprint’s 4G network which brings fast data speeds and good call quality. 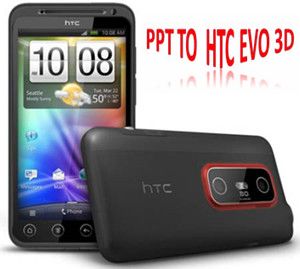 How to play PowerPoint on HTC EVO 3D with transitions, animations, music and video clips

Now, we will check out how to easily watch PPT on HTC EVO 3D with the help of Moyea PPT to Video Converter.

The benefits of converting PowerPoint to HTC EVO 3D video:

...
First, run the program and click “Add” to import PowerPoint files. It supports all PowerPoint versions from PowerPoint 2000 to 2010. Though we could directly save PPT as WMV video in PowerPoint 2010, but this PPT to HTC EVO 3D converter could help us to save PPT as other video formats like MP4, FLV, AVI, etc.
Then, click “Settings” to choose an output video format for HTC EVO 3D. Let’s pick MP4 as example. After that, we could further adjust the video and audio parameters for the MP4 video like video codec, video size, bit rate, frame rate, etc. 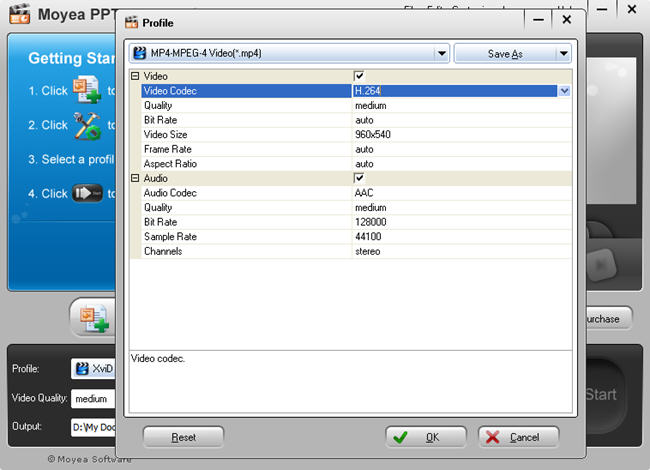 Next, we could choose to press “Customize” to customize the output video files like timing, music, audio, slide and conversion.

After all the preparations above, we could now hit “Start” button to start the PPT to HTC EVO 3D conversion.